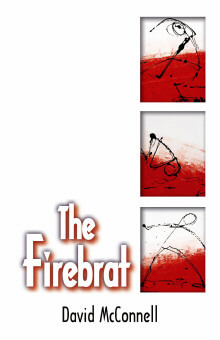 In this introspective work we watch brilliant, outspoken Elliot try to come to terms with his rapidly changing life. It is time for Elliot to grow up, in spite of his all-out effort to have the world "his way". He must find a way to integrate into his life: the disappointment of his love interest's outrage when Elliot writes a short story about him that not only outs him, but paints him as self-absorbed; the slow, agonizing (and irritating) death of his best (and only) friend; the inescapable truth that his literary hero is not all Elliot has made him out to be; and the alarming outcome of his infatuation with flying. Elliot is running out of charm and his denial is being quickly obliterated. All that's left is his spoiled, petulant, witty, intelligent, and highly amusing persona. But will that be enough to save him? Perhaps, perhaps not, but it is definitely enough to keep a reader turning pages far into the night.

"I love this book. Abjection has never been so gorgeous." - MATTHEW STADLER

Judging from Attagirl’s first novel outing, The Firebrat, high-quality literature is still being produced. First-time novelist David McConnell has given us a rish and artful story, a funny, scalp-raising, very ironic and wry account of a young man’s efforts to bridge the disparate halves of his life amid so much dying—while giving us a moving and convincing love story that doesn’t resort to the romantic conceits of, say, the “Fire Island Problem Novel” (meet a boy on a bad hair day, get embarrassed, attend some fabulous summer parties where you meet him again, this time looking oh so hot, go swimming with him arm and arm off the Pines: The End).

I mention what The Firebrat isn’t since finding words to describe David McConnell as a narrator and breathtaking stylist is a tall order. A universal system of irony is at cruel and witty work here. Elliot has come to New York from the Midwest to become a writer, but one of those urbane creatures of a high-cultural Old World that has been swept away by AIDS and is best exemplified by Elliot’s older idol, Ambrose. Ambrose, himself infected but surviving with no apparent signs of creative abatement, encourages him as an old-fashioned mentor would. A shut-in for a variety of neurotic reasons (though he’s perfectly healthy), Elliot hunkers down in his apartment reading books and tweaking a single short story based on his imaginings of a cute boy he knows vaguely from the gym. He wants to do something meaningful, make his life and his words resound. But when he shows the story to his muse, who he hopes will be flattered and fall in love with him, he’s scorned by the kid for using his real name and invading his privacy. Even worse, he’s again been misunderstood (and again, to amusing effect).

Mostly he’s hamstrung by his ex, Charlie, whose slow decline into wasting and eventual blindness becomes his hair shirt. Both men are prickly customers, parrying and feinting together in hilariously articulate struggles to come to terms with their breakup years before. McConnell has a deft, shining, multitasking prose, and in any one of his extended passages buried like gems inside another of his immaculately delineated scenes, his writing telegraphs emotion, detail, mood and character most authors require pages to get at:

He was very firm about the handling of salmonellic eggs. The slightest albuminous dribble had to be caught in my cupped hand, the edge of the garbage can wiped and my hands washed. I was so moved by my I-have-a-job happiness that I was doing funny limping dances and almost irritating him. Had my story had this completely unexpected effect on us? I felt I should wait for him to bring it up. Instead, he was talking about a boyfriend. In spite of AIDS and because of it, he continued to run through boyfriends as he always had. Lasting a month was a cute maudit barfly. That had been during Charlie’s brief phase of angry ActUp activism. Now he was seeing a young multi-millionaire composer. Seronegative himself, this self-satisfied man was erotically fascinated by the dying. The problem was, after a couple of weeks, the guy had grown too scared to gratify Charlie’s unstoppable sexual desire. “I’ve offered to wear two condoms—whatever—he won’t let me fuck him,” Charlie had told me a while back. This sexual frustration more than anything except AIDS itself gnawed at him . . .

Implicit in every moment detailed in this lovely, controlled, intelligent, sexy, dark, coarse, fine, linguistically variegated and often touching novel are the twin-tied epiphanies of love and outrage. The traditionally elegiac gay novel has been tempered in McConnell’s hands with brave depictions of base self-interest and Manhattan slapstick, which are mellowed and made poignant by a sensibility so modern and ambivalent, so truthful, that as he adds each bitter drop of irony into a solution of crystal clear empathy, the result is a tasty, if not sweet, summer refreshment. Think of it as one of those licoricey, grown-up Mediterranean aperitifs—to be savored while others are turning the pages of their gay-volleyball-and-Ecstasy epics on the beach.